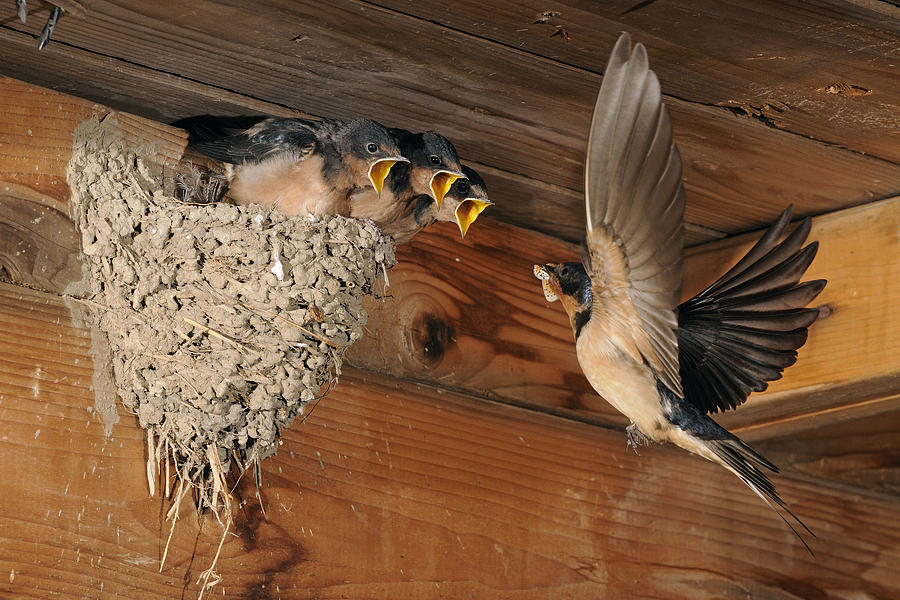 This picture was taken off the internet to give reference to what Barn Swallows look like, Copyright Fine Art America

I think of growing up and enjoying the sight of a beautiful old farmhouse with a gorgeous gigantic tree, reminding me of “The Waltons” (an old family TV show), bringing me comfort and warm feelings. The house was located in a National Parkland on Cape Cod, I remember it well, and never expected to have any connection to it.

Well, after all these years a woman I recognized arrived at Wild Care with a sick nestling Barn Swallow. (I’ll call her Jane.) We spoke of how and where she found the bird, it was from the old farmhouse! Jane grew up there!

The swallow was covered with mites and in critical condition. Unfortunately, we were not able to save this baby, it was just too weak. Swallow nests are often infested with mites. I advised Jane to purchase diatomaceous earth (sand made from the fossils of diatoms which are very sharp to tiny things like mites) and sprinkle it on the nest to help save the other babies.

Jane did treat the nest and the other babies fledged, but one was left behind. It had a wing droop. It was also infested with mites, and was in critical condition.

We hydrated the little guy with fluids, kept him warm, treated him for parasites and wrapped his wing. Our intern, Sarah Boucher, had to force feed the swallow for several days every 1/2 hour. She was very excited to tell us when she finally got him to gape (beg for food) and voluntarily eat the worms! It was stressful work but the outcome was awesome. He gained strength, and when his wing was unwrapped, he was able to use it.

A large cage was the next step with some physical therapy. We observed him with a camera and noticed him quickly using his wings more, and feet less as he flapped his wings.  He was also feeding himself from a dish. Jane had called to check on him and said that the swallows have been bombing her in the barn ever since she kidnapped their baby and wondered when he would be able to return.

He was finally ready to go home, he was placed with his flock and immediately accepted!

I was sadly told that the beautiful tree had blown down this winter. Now I have another treasured memory when I see this old farmhouse again, of this happy swallow story.