Auks in the Storm

Last week’s blizzard relocated a lot of things: people, power poles, and parts of the coast line. But nothing went as far off course as pelagic – or ocean-based – birds.

Caught in the giant swirling nor’easter last weekend, the birds were literally hurled and shaken and tossed – like a feathery Robinson Crusoe – to the shores of safety. Or in this case, Cape Cod.

At WildCare, the wildlife rehabilitation center in Eastham, the puffins just keep arriving. Monday’s latest arrive showed up from Sandwich, where the little ocean bird was found huddled under the outdoor stairs of the VFW hall.

The puffins, with their sleek black and white bodies and large vivid orange beaks, have drawn the public’s imagination.

Popular puffin tours off the coast of Maine show off the bird’s rookeries. Photographed on land, they stand tall and upright and look a bit like a North Atlantic penguin or a sea-living parrot, but are neither.

Puffins belong to the auk family, like their cousins the razorbills and the common murres.

WildCare has seen all three types of auks come through its doors in the past few days, storm-tossed from the North Atlantic.

Auks live at sea, except when they visit rocky coastal islands to nest. They use their wings to “swim” underwater with their feet as rudders as they hunt small fish, like herring and sand lance. They ride the ocean’s surface regardless of weather, and can fly up to 55 mph through the air as well.

Like other seabirds, they have special salt glands that let them filter salt out of their bodies. In the puffin’s case, they filter out the salt through special nasal cavities.

At this time of year, puffins and other auks swim and feast in Massachusetts waters. Intrepid spotters often report them far off Race Point, out in open ocean water.

However, puffins ashore are another story.

“It is definitely NOT normal to see puffins on the beach in Brewster or Sandwich,” said WildCare Executive Director Stephanie Ellis.

The most surprising thing about puffins is their size. They are, well, tiny.

From popular photos of the birds in their rookeries, one would expect a large bird – but the puffins are amazingly small. A healthy puffin weights in at just 380 grams, or a bit under two pounds. The birds fit easily into two cupped hands.

All of the auks – puffins, razorbills, and murres- that ended up at the center register in at 20% or more below that fighting weight. Staff said that the birds, caught up in the storm, had likely not eaten for days.

“Everyone is underweight,” said Ellis. “These are high metabolism birds, like humming birds, that need to eat constantly.”

“We take blood samples to see if the bird is anemic, if it is strong enough for solid food,” explains bird rehabilitator Alex Mueller, as she gently inserts an extremely small needle into the newly-admitted puffin’s small leg.

Birds might receive supplemental tube feeding – almost as if they are baby birds again. In addition the center helps treat injuries and illness as part of a streamlined process to get the wild birds back to the wild.

“There are lots of risks for these birds,” explained Ellis. “So our goal is to get them strong, get them into outdoor pools where they preen and re-waterproof themselves, and then release them.”

As soon as the birds eat solid food and begin to gain weight, they visit one of the center’s small covered outdoor pools. A sleek razorbill, colbalt and obsidian beak gleaming, paddles happily around the covered pool.

This bird, say staff, has in a few short days recovered itself. Today, it has been preening and appears waterproofed and healthy. Soon it will be winging back to its flock. Amazingly, a released bird navigates back to its kind, finding them across miles of ocean.

Another puffin, brought into the center from a Brewster beach earlier the weekend, also paddles in a covered pool, showing how quickly the hardly birds rebound.

Inside, other pelagic birds, including the large blue beaked, blue eyed northern gannet rest in quiet cages, continuing their recovery.

For storm tossed birds, releasing where found doesn’t necessarily make sense. For example, staff can be pretty sure that new puffin doesn’t live in the Sandwich VFW!

Instead, staff monitors reports on bird sightings at locations like Mass Bird. They also watch wind and weather. Together, this helps them ID the best site for release, where the bird has the best chance of finding its flock.

Sometimes the group works with Provincetown’s Center for Coastal Studies, who will take a ready-for-release pelagic bird out on one of its routine boat trips, releasing it closer to its home.

Other storm refugees too

The collaboration with the Center for Coastal Studies mirrors the regional collaboration among the wildlife centers, a relationship especially visible at WildCare’s site during this blizzard.

Humans get cold, but reptiles shut down. After a short drive from Sandwich, the turtles have been using WildCare tanks as a sort of emergency shelter, staying warm and fed until their own power gets restored.

As attractive as the auks might be, WildCare make clear they are wild birds – and all its efforts lie in returning them to the wild as quickly as possible.

“In as little as three day they can recover and be out of here,” said Ellis.

So by week’s end, the blizzard visitors will likely be back on the high seas, zipping about after sea lance or bobbing with post-blizzard swells, living out the winter and preparing to return to their summer nesting homes.

WildCare’s Winter auction was also rescheduled by the blizzard. The groups biggest fundraiser is now Saturday, Feb 16, at the Chatham VFW on George Ryder Rd, starting at 5:30 pm. Visit www.wildcarecapecod.org for more information. (Bird rehabilitator Alex Mueller (l) and WildCare executive director Stephanie Ellis (r) stand with a blizzard-tossed Northern Gannet found stranded on Ballston Beach in Truro. The non-profit animal care facility at the Orleans rotary has been caring for birds and hosting injured wildlife from other shelters which lost power during the mega-nor’easter that hit Cape Cod over the weekend. Photo by Teresa Martin.) (Alex Mueller from WildCare holds an Atlantic Puffin that has just arrived from under an outdoor staircase in Sandwich. The little bird will receive medical care and food before flying free again. Photo by Teresa Martin.) (Tiny needles draw blood from tiny puffin legs. The blood work helps determine if the bird is dehydrated, undernourished, or ill, so staff can give it proper treatment. Photo by Teresa Martin.) 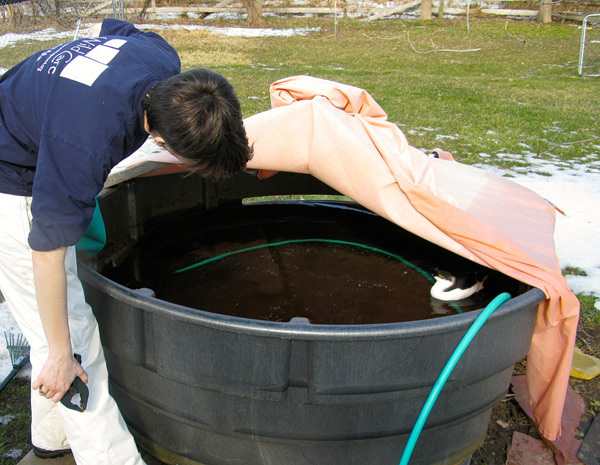 (After a few day of R&R aquatic birds spend time in enclosed outdoor pools, where they begin to preen and regain their water-resistant coating. Photo by Teresa Martin.) (A razorbill, with its distinctive onyx and cobalt beak, swims in one of the outdoor pools. Cousin to the puffin, this pelagic bird also blew inland during the blizzard; it is almost ready to return to the wild. Photo by Teresa Martin.) (This puffin flaps its wings as it is lifted from the outdoor pool. For the past several days it has been feeding and resting and just took its first dip, a step toward flying home. If all goes well, the newly admitted puffin from Sandwich will be preening in the pool in just a couple of days too. Photo by Teresa Martin.)to the wild. Photo by Teresa Martin.)