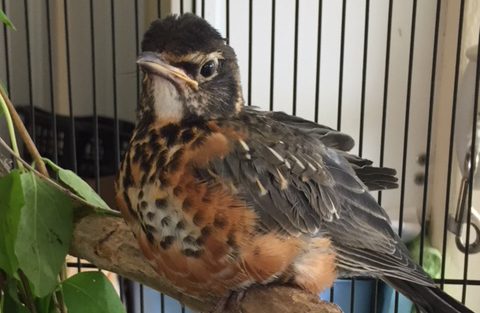 AMRO #429, a small fledgling American Robin, came to us in May with many challenges – weakness, dehydration, a twisted foot, a wing droop, possible blindness in one eye and ruptured air sacs – resulting from a probable animal attack. The respiratory system of a bird is more efficient than a mammal’s. Birds have air sacs where air passes through before-and-after it goes to the lungs. If an object (like a cat’s tooth) pierces the air sac, air leaves the sac prematurely and collects under the skin forming swollen “bubbles” that can be extremely uncomfortable to the bird, and can interfere with breathing. To treat this, we deflate the areas periodically and administer antibiotics. It was heart-wrenching to feed this bird. The bird’s neck was so swollen with air it could barely swallow. However, the bird was a little trooper and managed to beg well and eat enough to survive the first couple of days.

After the bird stabilized and was reassessed, it was confirmed the bird was truly blind in one eye, the wings were not right, and the foot was twisted. Even if the respiratory issue resolved, AMRO #429 could not be released back into the wild.

Wild Care Intern Bekka Evans worked closely with this bird and made us aware that Drumlin Farm, where she had also interned, might be interested in the Robin if it recovered from the air sac issue. Drumlin Farm is a Mass Audubon Wildlife Sanctuary in Lincoln, that teaches wildlife conservation using many educational animals, and she felt they would welcome the American Robin as an addition to their other songbirds.

To rehabilitate the little robin, we wrapped the foot in a flat splint that spread his toes out to a normal position, the twisted foot was corrected in a week. Baby bird bones are so great to work with – they heal quickly! The air sacs issue healed, and the wing droop seemed to resolve. This lucky bird now has a new home, thanks to our wonderful intern Bekka. She delivered AMRO#429 to Drumlin Farm the week her internship ended. We miss you Bekka! In the past several years Wild Care has sent an Eastern Box Turtle, a Broad-Winged Hawk and a Virginia Opossum to Drumlin Farm. All non-releasable.

These pictures show the progress made from the day AMRO#429 came in to the day he was ready for Drumlin Farm. Note the closed eyes, swollen throat and the clubbed foot in the first picture taken by the bird’s finder.