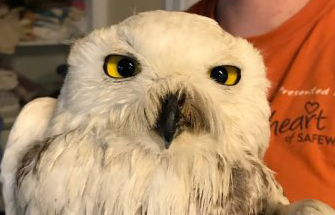 Wild Care, Inc., a wildlife rescue and rehabilitation center in Eastham, responded to a call about a sick Snowy Owl on a jetty at Wellfleet Harbor. Wild Care sent Nicole Madden, a Wild Care Volunteer and AmeriCorp Cape Cod Member, out to look for the bird. Nicole located what she initially thought was a white buoy, and was startled when it actually moved. She placed the owl into a rescue box and transported it to Wild Care. Click Here to Read Full Story
Wild Care staff assessed the bird, which was severely underweight, dehydrated and weak, and had bruising on its chest, knees and abdomen. “We took a quick radiograph (x-ray) and blood work, to see what we were working with,” states Stephanie Ellis, Executive Director. “Sadly, the owl’s blood work showed severe dehydration and that the animal was suffering from secondary rodenticide poisoning.”“Secondary rodenticides are slowly poisoning our wildlife,” states Ellis. When people use anticoagulant-rodenticides, such as d-Con and other brands commonly found at household stores, mice and rats become poisoned and debilitated, and hence easy prey for raptors and mammals. When an owl eats a mouse that has been poisoned, the owl itself becomes poisoned in the same manner. The poison accumulates in their bloodstream over time, depending on levels of exposure to the rodenticides. The anticoagulants in these products interfere with the blood’s ability to clot, causing massive bleeding, liver failure, anemia, and ultimately death. A normal blood-clotting response in a bird is less than 5 minutes. “This owl’s blood never clotted,” states Ellis. The bird’s emaciated state, bruising, and failure of the blood to clot, shows an animal with repeat exposure to rodenticides. “I wish that everyone who used these products could see what rodenticide poisoning looks like. These animals come in to us depressed and disoriented. Some can barely hold up their heads. They are anemic and often have extensive bleeding and bruising such as this owl. It is a painful sight to see. Treatment requires long-term therapy with supportive fluids, Vitamin K and nutrition, often over a period of a month or more.”

“Raptors and mammals are our most effective means of rodent control, yet we are slowly killing them. “ Studies have shown that hawks are significantly more effective at controlling rodent populations, than actual rodenticides. Pets and children are also, inadvertently killed by ingesting rodenticides. “There are many humane methods of deterring and controlling rodent populations. Exclusion (closing off the entrance holes that rodents use to get into a dwelling) is the ultimate answer. “It takes more time, but is the best long-term solution for controlling rodents. “
Wild Care staff worked late hours into the evening, providing fluids and initiating Vitamin K treatment. “We gave the bird a great fighting chance and kept it very comfortable. Sadly, the bird passed away this morning. The poison won the battle. It is so sad that this majestic creature, which traveled all the way from its Artic tundra to Cape Cod to spend the winter here, was slowly poisoned in its very own environment. Rodenticides are never the answer.”

WILD CARE’s wildlife rehabilitators treat birds, mammals and reptiles brought to the center, with the goal of releasing them back into the wild when they are capable of independent survival. Through public education, WILD CARE works to prevent wildlife casualties and works to engage the community in conservation through volunteerism. Since our founding, WILD CARE has accepted over 25,000 wild creatures, representing more than275 species of native birds, mammals and reptiles. If you encounter injured, orphaned or ill wildlife, please call the WILD CARE of Cape Cod helpline at 508-240-2255. Visit WILD CARE’s website at www.wildcarecapecod.orgto make a donation.

Click here for the article on Cape Cod Today.